Her small shoes are here with me. Size one and a half, white with embroidered flowers and small red hearts across the top of the toe.

Long gone is the little pink metal flake bicycle with handlebar streamers, the yellow cross-country skis with cartoon characters that barely reached over three feet long. Gone is the new child’s bedroom set, and so much more; all donated out with silent internal screams of heartbreak and the ebb and flow of spasms of grief.

In subsequent years when speaking of my daughter Carlie, I find it sufficient to say she was killed at the hands of a drunk driver. I say she is my only child, and she was only five years old at the time of her death. If I am speaking to a fellow passenger on a plane, or an audience of 800, I always feel that is enough torture for the unprepared. I know what it looks and sounds like when individuals as well as large rooms of people go still and silent when my words sink in.

I am usually reluctant to add to the shock of those listening with the full story, knowing they can look up the accounts online or listen in on the whispered conversations of those that may know – the horrible truth I most often reserve: Carlie’s promising life was snuffed out by Carlie’s own mother.

At the time of the collision, as a single parent with primary custody of Carlie due to an alcohol abuse issue in the marriage, I had a persistent and ongoing fear for my daughter’s safety. My fears stemmed from a career in the state highway patrol and my constant exposure to the realities of loss. These fears were not from newspaper headlines and articles but as an active first-hand witness to the carnage on our roadways.

At my insistence, the divorce decree stipulated that neither parent would consume alcohol when Carlie was with them. These were days before ignition interlocks were commonly available.  This language was all I could provide for Carlie’s protection during limited visitations with her mother.

The fabric of my worst nightmare became a vivid reality twenty years ago on January 1, 1998.

My position as a division supervisor in the Wyoming State Patrol created an atmosphere of high interest in Carlie’s story and MADD was at my side from the beginning. Toni Reichenbach, the Wyoming Executive Director was present for all court appearances and she participated in a documentary film that was done later that year. MADD California reached out and came to my aid when an episode of the Leeza Show crossed several lines during a two-hour live taping.

MADD provided victim and grief assistance at the very beginning which developed into volunteer engagement in Child Endangerment efforts. Through multiple speaking opportunities and a second career of ten years as MADD’s first Law Enforcement Initiatives Manager, I’ve been blessed with the opportunity to repay some of what I owe to the organization that helped me survive.

I am retired now; however, I remain active and willing to pitch in when I can. MADD’s efforts and success in Child Endangerment remains vital and current as we remain haunted by these ongoing preventable losses of our most helpless victims.

Carlie’s little shoes were removed from her feet the night of the crash. They bear for eternity her handiwork at tying laces and they will rest with me forever. 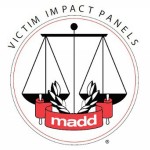